"I shudder to think what this community would look like if we didn't have Harvest. The things it has done have been transformative. Money has been invested ... with the right mindset of job creation and moving the community forward."
- Cynthia Ingram, Former Member - Harvest Foundation Board of Directors

QuickStart brings tennis back to the community

Aviana Turner stepped on a circle in the Mount Olivet Elementary School gym and picked up a child-sized tennis racket, one of the first times she had ever held a racket. Across a tennis net, instructor Rusty Lovell was poised to throw a special child-friendly tennis ball toward her, and Aviana’s classmates were eager to try and catch her volley.

The third-grader hit the ball hard enough that it soared above the heads of Lovell and the other students, bouncing off the wall of the gym.

It didn’t matter that she missed her mark. Aviana’s huge smile was just what Lovell wanted to see.

She was having FUN!

Lovell is a tennis instructor who is helping implement the kid-sized QuickStart Tennis format locally. QuickStart Tennis of Central Virginia (QCV) is providing tennis equipment and training in area schools, thanks in part to a $4,140 grant from the Harvest Youth Board. On Feb. 17, the program kicked off in the Henry County schools, including Mount Olivet, where it also was a fundraiser for the American Heart Association. 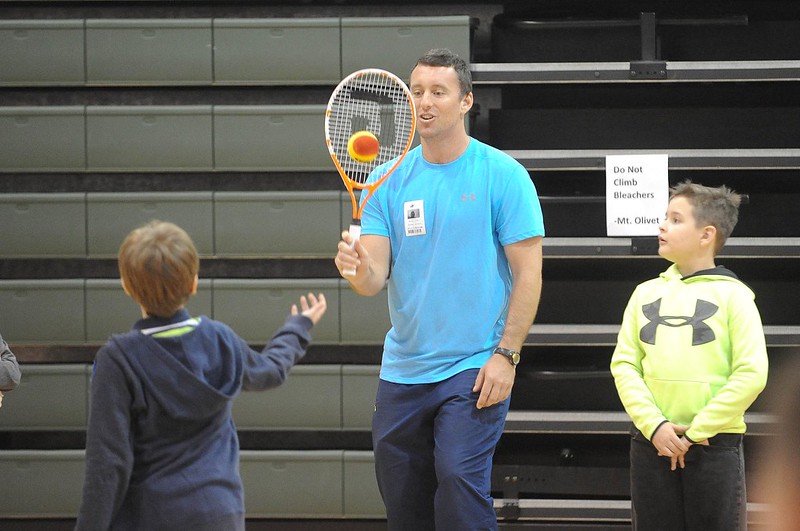 Lovell worked with all the children at Mount Olivet that day. After warmup exercises, the children played games designed to teach fundamental techniques of tennis along with motor skills, Lovell said.

The goal of the QuickStart program is to grow the sport of tennis, Lovell said. He also has a goal of developing a clear path for children to play tennis in college.

“My main focus or goal is to get kids from 5 to 9 years of age exposed to the fundamentals early on,” he said. By ages 10-13, he hopes to have youths traveling to compete at higher levels of tennis. He calls it a 5-year plan, and said already he is seeing youth with the potential to make that happen.

To try and spark children’s interest in tennis, Lovell said lessons have to be fun. “We create fun games that develop athletic skills, use tennis skills and develop athleticism,” he added.

It worked at Mount Olivet. The third-graders cheered when they did something right and were eager to try again when they missed a shot or catch. Lovell called them “sir” and “ma’am,” and they followed his directions to a “T.”

Kym Tatum of Chatmoss, the parent of a third-grader and a volunteer with the kickoff, said her son, Cole, was excited about the experience. Another parent and volunteer Erin Jenkins, also of Chatmoss; physical education teacher Amanda Pullman; and others added that this was the first experience with tennis for many of the children. Jenkins’ son, Nick, won one of the games with his partner, classmate Kaden Mellott. Tatum’s son, Cole, won honorable mention.

Tatum praised Lovell for being enthusiastic with the children and maintaining his energy level throughout the day.

“Tennis requires attention and focus for an extended time,” Lovell said. “That’s one hurdle I am excited to take on. I’m constantly changing my lesson plans to keep their attention.

The QuickStart program is perfect for children, Lovell said. It uses smaller rackets and foam balls, he said, explaining that a regular tennis ball is too hard and too fast for young children.

The special equipment “lets kids rally and control the ball at a young age. It’s changed the game,” he said.

Children as young as 3 and 4 can roll a ball and learn control to develop motor skills, while 5-year-olds can toss balls over the net and master other skills, he said.

To illustrate, Lovell told of working with a 6-year-old recently who did a 25-ball rally — hitting the ball back and forth over the net — 25 times.

"You have to love it. If you can do this sport, you can take on anything in life."
-Rusty Lovell

Tennis was big in this area and elsewhere in the 1980s, but interest started to wane in the 1990s, Lovell said. After Chatmoss Country Club’s tennis pro left in the early 2000s, Lovell said tennis started on a downhill slide from which it has not recovered. He attributes some of that to the economic decline of the area but also to the fact that there were not enough people striving to grow the sport.

Growing up here, Lovell got caught in that decline. He became interested in tennis by watching the great players in the sport on television, and then he started playing tennis on his own. “I realized there was no one to play with” at the performance level he was striving for, he said, adding that his goal was to play tennis in college.

He had to travel out of town for instructors and tournaments, which was costly in both time and money. Ultimately, he left the Martinsville schools in high school and transferred to Grimsley High School in Greensboro, N.C., where he played with a state-level team.

Lovell went on to play tennis at Radford University. After graduation, he worked in Charleston, S.C., and then San Diego, Calif., for a while before returning to his hometown of Martinsville.
He became a tennis instructor at Stratford Tennis Club in Danville and got connected with QuickStart Tennis of Central Virginia Inc., which raises funds to equip tennis programs in schools throughout central and southside Virginia to promote the game.

“It became my mission to fix the problem I had,” Lovell said, citing the travel time and cost he faced to excel at tennis. “I want to create a pipeline for a high-performance program. … I want to grow the game with both little kids and adults in their 20s, 30s and 40s. If parents play, their kids will play.” 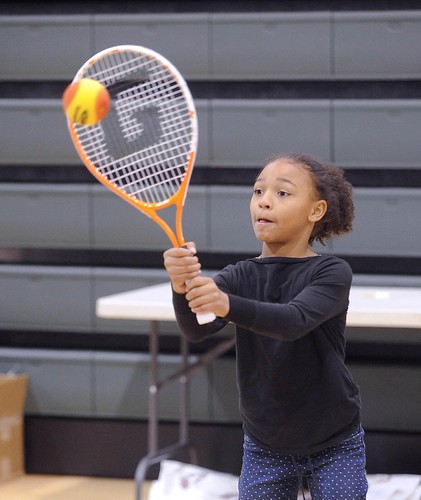 Third-grader Aviana Turner concentrates as she prepares to hit the tennis
ball during a drill in the QuickStart program's kickoff at Mount Olivet
Elementary School on Feb. 17, 2017.

Tennis emphasizes hand-eye coordination — his strength — as well as overall athleticism, Lovell said, adding that if someone is willing to put in the hours of practice, he or she will excel. In contrast, basketball players can put in similar hours but they may be limited by their level of athleticism, he said.

It also is a sport that can be played for a lifetime.

According to a 2015 article on the Tennis Recruiting Network website, tennis also is one of the few sports that blends mental and physical aspects, is ranked seventh out of all sports as the overall most challenging, requires anaerobic and aerobic strength, can be played as a team or individual, and instills discipline.

Some adult tennis players recently formed the Southside Area Tennis Association (SATA), with a goal of growing tennis participation in Martinsville, Danville and Stuart and their surrounding counties, Lovell said. The group will hold adult leagues, clinics, camps and assist with school programs, he said.

Betsy Haskins is the volunteer coordinator for the Martinsville-Henry County area, he said.
The group can be contacted through its Facebook page, he added.

Also, middle and high school students will be exposed to tennis this summer through a program at Patrick Henry Community College arranged by Shanna Francisco-King, director of Upward Bound and MHC After 3 at PHCC.

Eventually, Lovell would like to have after-school tennis teams in all the elementary and middle schools in this area. They could meet weekly and compete against each other, he said, and when coaches spot talent they could send the youths to Lovell for further instruction. 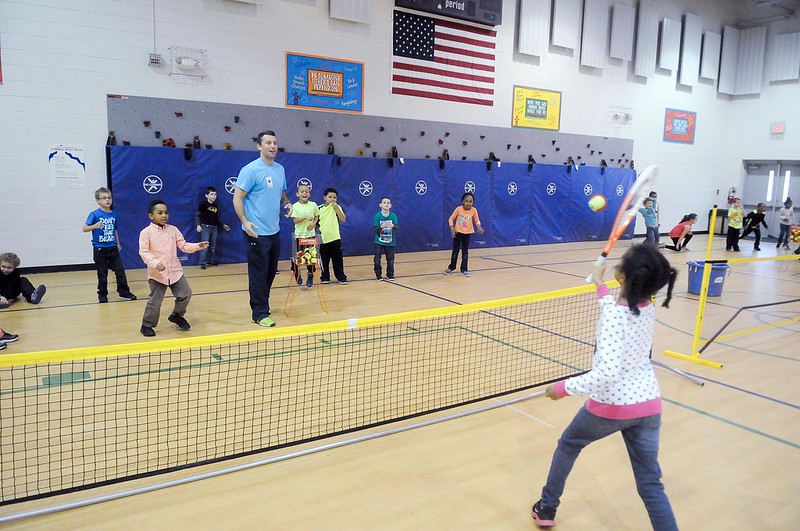 QuickStart has provided equipment for tennis programs in all the Henry County elementary and middle schools, and the sport has become part of the physical education curriculums, according Monica Hatchett, director of communications for the county schools. The county high schools have competitive tennis programs that are not part of QuickStart, she said.

QuickStart also has provided tennis equipment for the Martinsville preschool, elementary and middle schools and three of the six schools in Patrick County, according to Lynda Harrill, who founded the QuickStart program. It also has created a BrightSTARS tennis and nutrition program at the Clearview and Patrick Springs schools and has raised funds for a “tennis garden” to grow vegetables at Clearview. Carver Elementary plans to apply to QuickStart for a grant to create a tennis garden there, Harrill said.

According to its website, the organization currently serves 204 schools with 94,000 kids, 13 parks and recreation departments, three Boys & Girls Clubs and two YMCAs in 27 counties and three independent cities. It also introduced tennis into PE classes in 30 additional schools with 14,000 students in southwestern and eastern central Virginia as part of the Mid-Atlantic Supercharge School Tennis Task Force.