The Big Dipper water slide is about to close out its inaugural season at the Smith River Sports Complex (SRSC). The slide will close Sunday, Sept. 25, 2016 but it will be available for rentals after that.

For now, the slide is open on Saturdays from 10 a.m. to 7 p.m. and Sundays from 2 to 6 p.m. On Saturdays, a Piedmont Youth Soccer League (PYSL) special will enable anyone to slide as much as they want between 10 a.m. and 4 p.m. for $5, according to Billy Russo, executive director of the sports complex.

He has been pleased with the slide’s reception this year, and he said he thinks next year will be even better.

“We’ll be changing some things and having a whole year and all season to plan will enable us to launch it better than we did because we didn’t know when it would open,” Russo said.

That will give the sports complex staff time to market the Big Dipper in the schools and community “to get people excited about it before it opens,” he added.

Operating a water slide was a learning experience for the SRSC staff, Russo said.

For one thing, he wished the slide had opened in May. But it was delivered in early June, and then a fence, sidewalk and other amenities had to be added. Pricing was changed at the start, and it was decided that less staff was needed to operate the slide than had been expected.

“We haven’t seen it operate during an event” with crowds of players, families and fans, Russo said. “That will give us a good indication of how it’s doing. We’re excited about that. It helps us bring in events, too.”

The slide has been popular for parties, said Houston Stutz, director of marketing and public relations for the sports complex.

“Kids have a blast. If we can get kids out one time they will continue to come back. Parties do a good job of that,” he added.

It has been averaging revenue of about $400 to $800 a weekend, but Russo said the staff believes that can rise to $1,000 to $1,500 on weekends, especially during big events such as lacrosse tournaments at the complex.

“I’m more excited for (next) February, March, (and) April leading up to May when we can have a proper opening,” Russo said. “That will let people know about it.”

It also will give the staff time to develop advertising, work on pricing, recruit partners such as an ice cream vendor, and possibly add a concessions cart, picnic tables and umbrellas, he said.
“Give it some time. It’s a great attraction,” he said.

The Big Dipper and a golf driving range were added this summer at the complex, off Irisburg Road in Henry County.

"The driving range has has exceeded expectations, attracting 14 or 15 golfers a day, Russo said."

That is more than the 10 which had been projected at the start. Some people play two or three times a week, and one man plays every day, he added.

Little promotion was done for the range before it opened, Russo said. But word spread among golfers and before the opening, some called and came by frequently to see if it was ready for play, he said.

Golfers pay $5 to get 70-75 balls through an automated system so no manpower is needed to staff the range, Russo said. Volunteers oversee it at night, and the complex staff picks up loose balls and mows the grass occasionally, he added.

In the future, Russo said the range could feature long-drive contests, golf lessons and other activities to increase revenue. Also, the Patrick Henry Community College golf team wants to use it at a group rate, which is beneficial for the complex, he said.

The complex, which opened in 2009, has become an economic engine for the area, generating an average of more than $3.7 million a year for the area. That is according to an independent economic impact study which determined the three-year average figure for the complex from 2012 through 2015, Russo said.

The complex attracts visitors, players and others with more than 20 events held each year and 14 sports that are played on the six fields and other facilities, Russo said.

During the NJCAA D1 Men’s Soccer National Championships held at the complex last year, 850 hotel and motel room nights were used, contributing $71,000 to those businesses, and more than 4,000 meals were purchased by the athletes. That tournament boosted the complex’s economic impact on the area to more than $5 million last year, Russo said.

Not all of the complex’s revenue came from sports-related activities and events. For instance, it hosted the Wine By The River Annual Wine Festival and the Smith River Fest, both of which are being held again this year.

Russo called the study’s economic impact figures conservative and said he hopes the complex will continue to grow.

“We’re getting older,” he said. “We are realizing we need to change some things to compete, and we are doing that. People in the community realize it and are helping.”

That help resulted in the additions of the water slide and driving range, both of which were funded by the Martinsville-Henry County Economic Development Corp. (EDC).

In addition, The Harvest Foundation, which was instrumental in developing the complex, has agreed to provide level funding — a total of $600,000 — for the next three years.

The EDC’s Tourism Division also helped organize the recent Smith River Fest, which attracted about 1,800 people to the complex on Aug. 13. 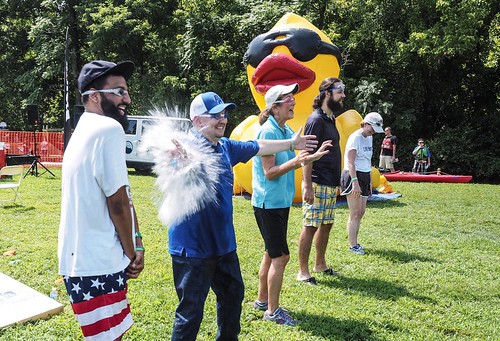 Smith River Fest and more
The annual event has grown in its diversity. In addition to booths, inflatables, fishing lessons and food, it included a rubber duck race to benefit the Boys and Girls Clubs of the Blue Ridge, mud run staged by the local YMCA, canoe and kayak races, water balloon fundraiser for the United Way, tubing and more.

“An event like that is pretty neat. Everyone came together and it worked perfectly. … It’s good to have an event that other community nonprofits can make some money off of,” Russo said.
Tourism Director Jennifer Doss agreed.

“It’s a great partnership … everybody does their job,” she said. “There are no worries” and were no problems with the event.

This year, the design of vendors’ booths was changed to improve each one’s exposure and tubing on the Smith River was added — and proved popular.

“It (the festival) raised awareness of the river as well as the vendors,” said Stutz.

He noted that the tubing was booked the entire day and suggested that area groups can capitalize on that interest.

Doss said the 98-degree heat and 90 percent humidity on the day of the festival reduced the crowd to about 1,800, which was roughly 1,200 fewer than last year, she said. The EDC had estimated that about 1,500 people attended the festival in 2012, according to a 2013 Martinsville Bulletin article.

This year, festival-goers were from nine states and 52 Virginia counties; last year, 10 states and 49 Virginia communities were represented, Doss said, using information from attendees’ ZIP codes that were collected at the event.

That, she said, shows “that the event did bring in additional Virginia tourists to the area this year, despite the lower total attendance.”

Doss also conducted a survey of festival-goers and said organizers will look at the results for possible changes in the event in the future.

The sports complex also is being used for more non-sporting events now. For instance, Eastman held an employee appreciation event there, an Alzheimer’s Walk was held Sept. 10 and a “Fall Vendor Blender by the River” is planned Sept. 24.

Fitness stations were added by Jonathan Hummer for his Eagle Scout project. New sports include golf; Cross Fit games, called Showdown on the Stateline, to be held Sept. 24-25; and girls youth lacrosse.

Russo and Stutz continue to market the complex to get attract more events that will benefit the SRSC as well as the community.

“Our uniqueness is a one-stop shot sales and service,” Russo said. “We sell the facility and operate the events,” and have a great location between airports in Roanoke and Greensboro, N.C.

But different complexes appeal to different events for different reasons, he said. “A lot of people like the smaller area (with less traffic). Others don’t like that there aren’t four-star hotels” in the area, he added.

Challenges
“The budget is always a challenge,” Russo said. He praised the Harvest Foundation for providing funds for the complex. The foundation and other partners, such as the localities and EDC, “understand it’s a return on investment for them,” he added.

While that percentage increases, Russo said The Harvest Foundation funds are level because the complex’s maintenance costs are expected to rise as it ages.

“They want to make sure the facility is kept up the way it’s supposed to,” he said.

Also, the complex has 30-40 volunteers throughout the year, but with events held three or four times a week, it needs more, Russo said, adding that as many as two to five helpers a day are needed during usual Piedmont Youth Soccer League (PYSL) play and tournaments. SRSC now works with groups such as churches and nonprofits, giving them a donation in exchange for their members volunteering at the complex, he said.

Individuals or groups interested in volunteering can contact Stutz at the complex, he said.
Also, competition from other sports complexes has increased in recent years, Russo said, and if he could add something at the complex, it would be lockers and more seating.

“We can’t handle some events because we don’t have 10 fields, but we also don’t have hotels” to handle large groups of families and fans for such events, he said. “We focus on what we can control.”

Russo said The Harvest Foundation expects three things from the SRSC: that it be an economic driver, that it work toward being self-sustaining, and that it help provide an active, healthy lifestyle for the community.

“I think we do all three,” he said, pointing to the free fitness stations, paw path for dog-walkers and the planned extension of the Dick & Willie Passage trail to the sports complex as amenities which promote healthy lifestyles.

“I feel great about how far we’ve come,” Russo said.

Still, more may be done in the future, such as adding a shelter by the Smith River, which runs along the complex property, as well as a zip line, mountain bike trails and more events such as weddings and parties, he said. He noted that on weekends, people of all ages, races and demographics can be seen at the complex.

“I think Harvest envisioned what we could be. We’re getting there,” he added.